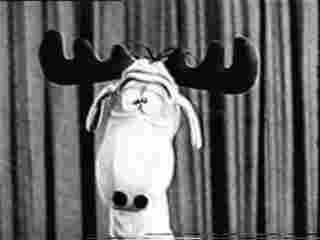 The Bullwinkle Show was a spin-off of Jay Ward's successful Rocky and his Friends series. The Rocky and Bullwinkle characters had been created in the late 1940's by Ward's former partner, Alex Anderson, as part of The Frostbite Falls Revue, a series proposal which didn't sell. The series was to be the adventures of a group of animals running a TV station in the North Woods. The cast (seen in the background of this web page) included Oski Bear, the station's cameraman; Blackstone Crow, the director; Sylvester Fox, an egotistical actor ; Flora Fauna, the leading lady; and Rocky the flying squirrel and Bullwinkle, a French-Canadian Moose.

Ward loved the moose and squirrel characters, and years later decided to use them in a new series. Rocky and his Friends premiered on ABC-TV on November 19, 1959. On September 24, 1961 it was renamed The Bullwinkle Show and moved to NBC-TV in prime time. In addition to airing the shows in color, NBC devised a gimmick where the cartoons would be introduced by a Bullwinkle puppet, voiced by Bill Scott. The puppet would make fun of current events and celebrities, including Walt Disney, who happened to follow The Bullwinkle Show on NBC Sunday nights.

On one occasion, the puppet told the kiddies in the audience to pull the knobs off their TV sets. "In that way, we'll be sure to be with you next week." NBC, after hearing about an estimated twenty thousand tots who complied, was furious. The next week, Bullwinkle asked them to put the knobs back on with glue, "and make it stick !" Shortly after, the puppet was dropped from the series.

Bill Scott, who had worked at UPA, was the co-producer and head writer of the Jay Ward cartoons. Scott, who was born August 2, 1920, in Philadelphia, Pennsylvania, was also the voices behind Bullwinkle, Dudley Do-Right, Fillmore, Mr. Peabody, George of the Jungle, Super Chicken, Tom Slick, Cloyd, and many other supporting characters. He was a multi-talented man who later supplied voices for Disney's Gummi Bears and Wuzzles series, Hanna-Barbera's Velveteen Rabbit special for ABC-TV, and Buzzco's Wacky Wallwalkers special for NBC-TV. He passed away of a heart attack on November 29, 1985, in Tujunga, California.

"...My grandfather was diagnosed with pancreatic cancer in 1969. He died six weeks after it was found. At the time he was working for Jay Ward, one of the most amazing guys on the planet. To give you an idea of Jay's character, he kept my grandfather on the payroll as a full employee the entire time he was sick until the day he died. I was lucky enough to meet the guy a few years before he passed away and I've always thought that a Jay Ward biography, focusing a bit more on the man than the work, would be really interesting, such as the time he had a wooden cutout of himself take his place in the reception line at his daughter's wedding with a tape looping "Hi, I'm Jay Ward. Thanks for coming."

Jay Ward was born September 20, 1920, in San Francisco, California, and died of kidney cancer on October 12, 1989, in Hollywood, California.

Michael Francis wrote to me recently, and attached a photo of an interesting curiosity:

I replied that, while I have never seen these dolls before, frequently a manufacturer will make a mistake with licensed characters and display the wrong copyright notice. I have a Bozo the Clown book from the 1960's which states that it is © Hanna-Barbera Productions, when in fact it should have read Larry Harmon Pictures.

If anyone has any further knowledge of these dolls, please e-mail me or Mr. Francis. 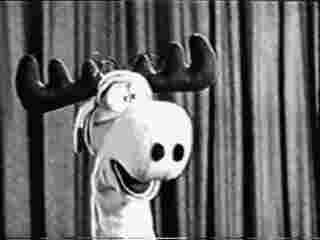 Click here for the Rocky and Bullwinkle Episode Guide

See a Cheerios commercial with Bullwinkle 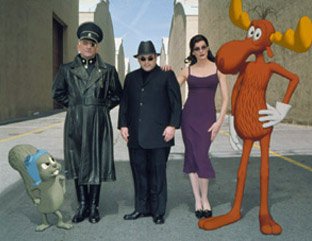 In the movie, Boris (Jason Alexander) and Natasha (Rene Russo) break a code which enables them to break out of the two-dimensional cartoon world into the real world. Under the direction of Fearless Leader (Robert De Niro), the two Pottsylvanian attempt to turn the citizens of America into a nation of zombies using a fiendish device that produces nothing but Really Bad Television. Bullwinkle (voiced by Keith Scott) and  Rocky (voiced by June Foray) attempt to stop the Pottsylvanian archvillains, assisted by FBI agent Karen Sympathy (Piper Perabo). Cameos by Janeane Garofalo, John Goodman, Don Novello, Jonathan Winters, Whoopi Goldberg and Billy Crystal. The movie is narrated by Keith Scott, doing a very passable imitation of the late William Conrad.

Australian Keith Scott, the man behind the narration and Bullwinkle's voice in the movie, met his childhood heroes, Jay Ward and Bill Scott (no relation), while still in his teens. Through them, he has had access to virtually every key player in the Jay Ward empire. He has written a book, "THE MOOSE THAT ROARED", that covers the entire history of the Jay Ward Studio, from Crusader Rabbit to Cap'n Crunch. This hard cover book, written over many years, is 442 pages, illustrated, and full of information and details. In-depth information on Gamma Studios, P.A.T., DFS and more. It's a great book, and a highly recommended addition to any animation reference library.

Order the book from Amazon.com by clicking the picture above. 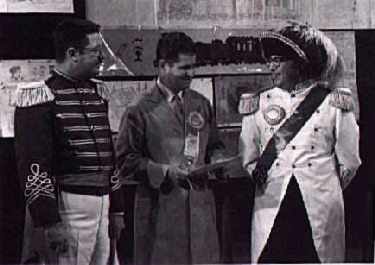 Bullwinkle and all related characters are ©Jay Ward Productions, Inc. The Toon Tracker sites are not endorsed by any of the respective copyright owners. The creators and maintainers of this web site take no responsibility for the information provided herein. All products and brand names mentioned are trademarks or registered trademarks of their respective owners. All characters and all related slogans and indica are trademarks of the respective copyright owners. The use of such material falls under Fair use provisions.

This WEB site created and maintained by Ron Kurer. Send comments to: